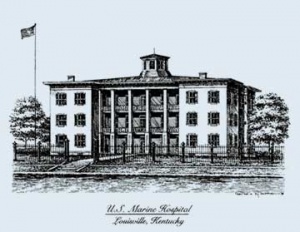 In 1837, Congress authorized the construction of the U.S. Marine Hospital in Louisville “for the benefit of sick seamen, boatmen, and other navigators on the western rivers and lakes.”In the parlance of the day, “western rivers and lakes” referred to the Ohio and Mississippi river systems, and the Great Lakes.

By the 1840s, steamboats dominated river traffic and were the major factor in the growth and development of industry.

The hospital’s site, midway between the Louisville and Portland wharves, was selected for the “beneficial effect of a view of the water, and the impressions and associations it would naturally awake in the minds of men whose occupation were so intimately connected with it.”

The boatmen served by the hospital worked difficult and dangerous jobs. Injuries due to engine or boiler explosions, wrecks, collisions with river snags and freight handling were common dangers. Exposure to extremes of temperature, from the sub-tropic heat of the Mississippi delta to frigid Great Lakes, claimed victims.

Diseases affecting the boatmen included yellow fever, cholera, smallpox and malaria. While docked in the rough port towns of the time, violence, alcoholism and social diseases sent many boatmen to the marine hospitals.

In the early days, 20 cents a month was withheld from their salaries to pay the boatmen’s share of their healthcare in marine hospitals, with the federal government also providing support. This was the first example of pre-paid health insurance in American history.

The Marine Hospital Service was the genesis of America’s modern health care system and is responsible for major improvements in research, hygiene and science-based medical treatment. 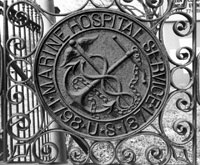 The seal of the Marine Hospital Service honors its founding by President John Adams in 1798 and its conversion to the Marine Hospital Service in 1871. The seal was designed by America’s first Surgeon General, John Maynard Woodworth, and features a caduceus crossed with a fouled anchor. A fouled anchor represents a seaman or boatman in distress. The caduceus is the symbol of Mercury and was used by ambassadors as a sign of peace. It is also associated with trade and represents the Service’s long relationship to merchant seamen and the maritime industries.

The Marine Hospital has been selected as one of 10 Buildings that Changed Louisville by the Kentucky Chapter of the American Institute of Architects (AIA Kentucky)! These buildings will be featured in a series on KET’s Louisville Life.