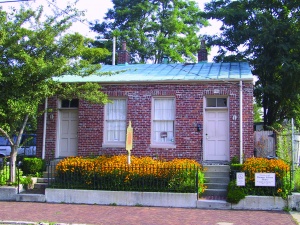 Thomas Alva Edison remains today a name in history that is readily recognizable by millions of people worldwide and to the surprise of many, Louisville, Kentucky can stake claim to a portion of this prolific inventor’s early career. Edison was born on February 11, 1847 in Milan, Ohio, moved to Port Huron, Michigan at age 7, and by his late teens was traveling much of the country while working as an itinerant telegraph operator. A 19-year old Edison arrived in Louisville to work for Western Union during the late spring of 1866, and it was during part of this stay that he rented a room in the double-shotgun cottage found nestled in the city’s Butchertown neighborhood.

Today this neighborhood has been designated a National Historic District, and the cottage is now home to Thomas Edison House, an historic house and museum that seeks to preserve the memory and remarkable achievements of Thomas Edison. Built in the early 1850s by a German immigrant craftsman, the structure is one of the few remaining examples of the double-shotgun cottage. The museum features a newly restored and renovated 19th-century style boarding room where Edison would have stayed during his time in Louisville, and numerous exhibits are on display highlighting a number of his most famous inventions, including cylinder and disc phonographs, incandescent lamps, and early motion picture equipment.