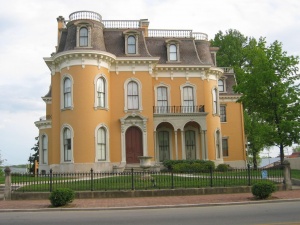 At age 21, William S. Culbertson left his hometown of New Market, Pennsylvania, to seek his fortune in Indiana. Settling in New Albany, he found employment as a clerk in a dry goods store. Culbertson possessed exceptional business sense and energy and, in 1854, started his own utility company, eventually becoming a prosperous, independent businessman. In 1868, Culbertson retired from the dry goods business to invest his money in new ventures, including the Kentucky-Indiana Railroad Bridge Company.

Culbertson invested much of his wealth in New Albany. He involved himself in civic affairs; funded and supervised the construction of the Culbertson Widows Home; served as a Trustee of the First Presbyterian Church; and founded the Cornelia Memorial Orphans Home, named for the second of his three wives. Culbertson was widowed twice and married for the third time at age 70.

He died in 1892, at the age of 78, achieving a net worth of $3.5 million dollars — about $61 million in today’s economy. William, his first two wives, and several of his children are buried in New Albany’s Fairview Cemetery.