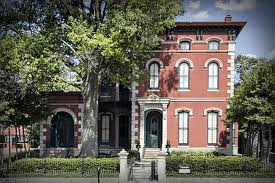 The Ronald–Brennan House, often referred to as just the Brennan House, is a historic Italianate townhouse located in Downtown Louisville, Kentucky. It was listed on the National Register of Historic Places on August 11, 1975.

The Brennan House is the only historic home remaining on a street once lined with similarly grand homes – an oasis of Victorian refinement amid Louisville’s downtown business district. The three-story brick, Italianate townhouse features six bedrooms, expansive side verandas, period garden and elegant interior finishes dating to the Victorian era. The house is furnished with an original family collection of the most luxurious and opulent furniture and decorative arts of the day and features a preserved early 20th century medical office.

While the architect is unknown, according to The Encyclopedia of Louisville, edited by John E. Kleber, the house’s style is similar to those designed by renowned Irish architect Henry Whitestone. Constructed in 1868 by tobacco wholesaler Francis Slaughter Jones Ronald, the house was purchased in 1884 by Thomas Brennan for $12,000 and remained home to the Brennan family for 75 years.

Thomas Brennan was a native of Ireland who made his fortune as an equipment manufacturer and inventor. He and his wife, Anna Bruce, had nine children – eight of whom survived into adulthood and grew up in the house.

The Brennan family was extremely close-knit. While the center of activity was always the family home, the Brennans also mingled with Louisville society and traveled widely. In fact, there was hardly ever a time when some member of the family was not in Europe. Souvenirs of their trips are still very much in evidence all throughout the house.

Two of the sons became doctors. One of them, Dr. J. A. O. Brennan, added an office and waiting and exam rooms in 1912 as a north wing to the house. Other children moved to New York, including one son who became treasurer of the New York Yankees. By 1962, only four Brennans remained, two having returned from New York to live with Dr. Brennan. Out of eight children, three married and they were all childless.

The Brennans were among the first in Louisville to have electric lights, and the house features elaborate crystal and etched-glass chandeliers as well as a signed Tiffany lamp. Other original artifacts throughout the home include stained-glass coats-of-arms by Louisville artist Bernard Alberts; massive, hand-carved furniture; mantels crafted from hand-carved marble and slate; ornate silver service; steamer trunks containing memorabilia of world travels; a library containing richly-bound volumes; and a collection of family portraits. Medical equipment, instruments and furnishings are displayed in the medical wing.